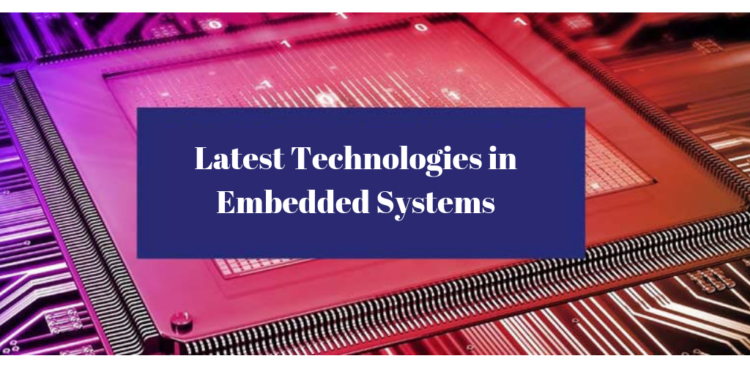 Some of the Latest Technologies in Embedded Systems

Virtual reality(VR) is a way to create a computer-generated environment which can be explored and interacted by a user that make the user into a virtual world. The definition of ‘Virtual’ is near and ‘reality’ is what we experienced as human beings. So, the term ‘Virtual reality’ basically means ‘near-reality’.
Augmented Reality turns the environment around you into a digital interface by placing virtual objects in the real world. Augmented reality continues to develop and become more passive among a wide range of applications. Augmented reality uses the existing real-world and puts an virtual information on top of it to enhance the experience. Whereas, the virtual reality makes users making an entirely different environment altogether as a virtual one.

IoT is an Internet of Things and it involves extending internet connectivity over different devices such as desktops, laptops, smartphones, and tablets. The devices can communicate over the internet with Embedded technology. The ability of data transfer over the network without the requiring human to human or human to computer interaction.
Nowadays, the IOT application will rapidly increase very highly. These IOTs are being established relating to Automobiles, home appliances, medical and care, transportation and industrial purpose. An IoT is a Web-enabled smart device that uses embedded processors, sensors and communication hardware to collect, send and act on data from the environments. IoT will perform in our daily life applications such as automatic door locking system, automatic power management, automatic vehicle speed management etc,

Cloud connectivity utilizes several quick connections and security protocols that facilitate to Leverage data storage, network, computer, and user interface. Initializing cloud connectivity and employing it to transform a business is a difficult task.
The cloud connectivity solution providers ensure that they are improving the time to market and total cost of ownership. Cloud connectivity provides fast, secure, and reliable private connections to public cloud services. It will provide reliable, low latency network performance and simplified scaling of all services.
Bluetooth mesh networking is a protocol based upon the Bluetooth low energy that allows for many-to-many(m:m) communication over the Bluetooth radio. Bluetooth technology is a secure wireless connectivity and also supports the mesh networking. The mesh capability enables many to many device communications and is optimized for creating large-scale device networks and it is ideally suited for building automation, sensor networks, and tracking solutions. It is a low power radio technology.

Machine learning is a major application in Artificial Intelligence that provides the ability to learn automatically and improve from experience without being explicitly programmed, it is mainly focused on the developing the computer programs, that can access the data and learn it for themselves. Machine learning always tried to increase the accuracy but it doesn’t not about the success but in AI always tried to increase the success, not accuracy.
Machine learning is the ability for computers to learn and act without being explicitly programmed. Machine learning is a branch of science that deals with programming the systems in such a way that they automatically learn and improve with experience. Here, learning means recognizing and understanding the input data and making decisions. Algorithms are developed for making all the decisions based on all possible inputs. There are two ways for analyzing the Machine Learning Algorithms.
There are many ways to implement machine learning techniques, however, the most commonly used ones are supervised and non supervised learning.
Supervised learning deals with learning a function from available training data. There are many supervised learning algorithms such as neural networks, Support vector machines(SVMs), and Naive Bayes classifiers. Mahout implements Naive Bayes classifier. Basically here the input data is called training data and it a known label or result at a time.
Whereas Unsupervised learning makes sense of unlabeled data without having any predefined datasheet for its training. Common approaches to Unsupervised learning include:: K-means, Self-organizing maps, and Hierarchical clustering. whereas Unsupervised MachineLearning, input data is not labeled and does not have a known result.

Most modern systems have at least two cores(Dual Core) or four cores(Quad Core), six core(hexacore) or eight core( Octa core) Processors. By adding the multi-core processors, these boost the substantial performance over a single CPU.Intel AMD both have the Quad core processors. Nowadays, everyone showing interest and implementing the Multicore technology only here Multiprocessor core technology is widely used many applications like General

Sensors are the devices that are frequently used to sense and respond to electrical or optical signals. Usually, the output of the sensor will be in the form of an electrical signal or an optical signal. Sensors are devices that measure the physical parameters (for example Speed, temperature, humidity, sound, light, and pressure) and converts them into signals which can be which can be measured electrically. Here, the data such as pressure, light, and the temperature is an analog data and this data will be converted into Digital signals (because the processor will understand the digital signals only) by using the ADC converters.
In our daily life, we use different types of sensors in various applications such as LDR sensor, PIR sensor, the infrared sensor, ultrasonic sensor and temperature sensor etc.
For example,

Security is one where the features are inaccessible to unauthorized users, therefore the system will be protected. While safety needs to be secure the systems. Safety and security is the major one for protecting the data and technics which was developed from the other developers and hacker.
Nowadays, everything has gone to hacking easily that why our embedded technology is looking for good security and safety. So while designing any system we need to take care of the security mainly. If you design any product without security, this product will be copied by another company by adding some more features. So it is important for designing any product with security.

Networking consists of two or more resources and is used to share the data and exchange the files.mainly in systems networking will be used to share the data in between the multiple systems. Networking is a protocol which used for distributing the packets in different paths to obtain the fastest response and reducing time consumptions. Here so many networks will be used such as LAN WAN MAN WLAN
LAN means Local Area Network which occupies less area and in that certain area, it will share the data in between the resources. It is generally limited to a geometrical area such as school, lab, and building.
WAN means Wide Area Network which occupies large area such as a world or countries etc, here the main example is the internet the data will be shared throughout the world within a second.
MAN means Metropolitan area which occupies the large area when compared to LAN system and less area when compared to WAN such as cities and data will be shared in a certain area that some cities or places. MAN network will be used by some companies to make their own infrastructures.
WLAN means Wireless Local Area Network which is based on LAN with wireless Wifi network.
Communication is a mechanism of data transferring between the resources and there are using different communication techniques like serial and parallel communication. SerialCommunication means the data will be transferred from source to a destination in a single way. While the parallel communication means the all the data will be transferred at a time in a different way. Here, the number of bits is equal to the number of transmission ways.
Where some of the serial communication used in the Embedded systems are CAN Protocol, I2C protocol, SPI Protocol, USB protocol.
I2C means Inter-Integrated circuits protocol which was originally developed by Philips Semiconductor. I2C is a serial protocol for two-wire interface to connect the devices like a microcontroller, Memories, A/D and D/A converters, I/O interfaces and other similar peripherals in embedded systems. In this protocol there available one Master and multiple slaves to data transfer.
Serial Peripheral Interface is a Synchronous Serial communication and it is used for short distance communication. SPI was developed by Motorola in the 1980s.
USB means Universal Serial Bus and it is used to transfer the data from source to destination
through serially.